The first of several posts detailing the HECTIC ACTIVITY going into ASLE-UKI & Land2’s biennial conference, Cross Multi Inter Trans, to be held at Sheffield Hallam next week (6-8 Sept 17)––from my perspective at least.

First of all is the collaboration I’ve been working on for over a year now with the Elsecar-based artist David Walker Barker. The project draws on the histories of erasure and resource in the moorland communities of Langsett and Midhope, ten miles north west of Sheffield, which were transformed by the construction of several large reservoirs that drowned farmsteads in the valley. How does one balance affective loss against municipal need? What happens to the social-ecological dynamics of such a contested landscape?

Between the interstices of this vast topographical transformation, we have also been seeking an older erasure: the “Jossie Cabin”, a shepherd’s hut that stood on Stanny [stony] Common, just south of Langsett Reservoir. Joshua “Jossie” Sanderson, an eighteenth-century shepherd, was last heard of in a 1930s note by Sheffield rambling activist Geoff Ward, in the Clarion Rambler’s Annual that he edited, along with a fuzzy picture of the ruined shelter.

My poem, which has emerged from this collaboration, is entitled R/S Res: in the final form of the artwork it will appear in conversation with Walker Barker’s worked-over images of the area, rendered on slate through a transfer printing process, along with found objects from the landscape. I won’t post images of the finished work here, little over a week before the exhibition opens, but below are some pictures of the process: 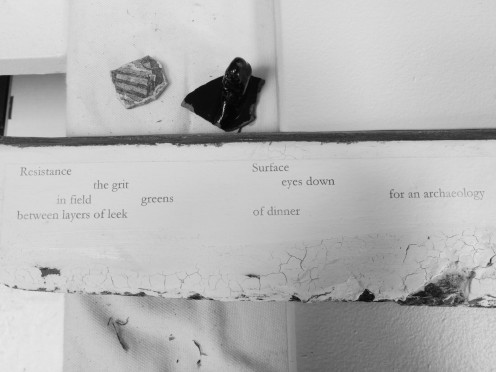 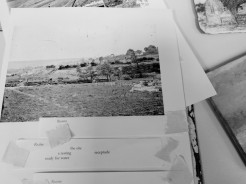 Secondly, for those attending the conference who haven’t yet selected their field trip, this is also a plug for the jaunt on Thursday afternoon (7th Sept) to David Walker Barker’s studio, including a panel to be held at Elsecar Heritage Centre on the theme ‘surface & underground’:

Dan Eltringham and David Walker-Barker – Searching for Jossie: Surface and Underground in the Layered Landscape of Langsett and Midhope

Going underground: a visit to the artist David Walker-Barker’s studio and collections, Elsecar. Walker-Barker’s studio(s) house a wonderful, eclectic collection of findings that tell the story of his practice, engaged with aspects of geology and landscape evolution, human extractivism and vast, nonhuman time-scales. You’ll encounter a fossilised marine crocodile, minerals and crystals pulled from every mine shaft and cliff-side quarry in the north of England, seventeenth- and eighteenth-century bottles and ceramics from past eras’ waste-disposal solutions––and the artist himself. From the layers of time embodied in disrupted strata Walker Barker has excavated superb ammonites from abandoned alum shale excavations on the North Yorkshire Coast, deep-toned amethystine quartz from the volcanic rocks of the Peak District, Derbyshire, and from an abandoned quarry in the North Pennines the most spectacular and perfect crystals of colour zoned fluorite speckled with brilliant diamond like crystals of quartz, all set within uniquely fashioned artist’s cabinets. The quarried and mined environment has provided a visual theme for Walker-Barker’s art works, which reflect both the structural complexity of geological processes and the cultural and industrial dimension of their impact upon landscape forms and in particular the people who toiled in those industries.

Indeed, Elsecar itself is an extremely interesting conservation village for industrial heritage, transformed by the Earls Fitzwilliam into a major regional centre for iron and coal extraction. This excursion will begin by visiting the Elescar Heritage Centre, set within a restored ironworks and colliery that is home to artists’ studios, antique centres and exhibitions. There will be an academic panel within the Heritage Centre itself, and we’ll tour ruined ironworks, waggon ways, the reservoir, canal and bell-pit-carpeted woods, in addition to the core site and seeing the Newcomen Beam Engine in action: heady stuff. If there’s time after all that we’ll repair to a local pub before returning to Sheffield.