Welcome to the fifteenth anniversary edition of Route 57, the University of Sheffield’s creative writing journal. This issue contains innovative poetry, fiction, drama and non-fiction from Sheffield’s finest writers. Issue 15 of Route 57 takes inspiration from the exhibition at The Hepworth Wakefield, ‘Modern Nature’, to explore the relationships between urban environments and the natural world. Buy it here (free p&P).

The book contains place-writing stimulated by the place(s) of modern natures, bringing these local and global understandings together. Its content ranges from the local environs of Sheffield street trees and interstices of our towns and cities, to the climate politics of our global environs, plastic pollution, and the ambivalence of industrial heritage. Inside you will find, among other things: re-wilding & the fabrication of the ‘rural’; The Brontës; Leeds and Sheffield psychogeography; the Great Pacific Garbage Patch; dark ornithology; Sheffield steel; scarecrows; The River Don; mushrooms, spiders, foxes; pears & street trees.

This hand-made book is printed using authentically grainy risograph technology, a printing method that is much greener than conventional printing: riso ink is river-friendly, and it uses much less energy per page than a conventional laser printer. We were also fortunate to have the issue designed by the exceptionally talented book artist Abi Goodman (Sheffield Creative Guild) and printed on risograph by Footprint Workers Co-Op, Leeds. Environs really is an object that connects a lot of creative people and places, both within Sheffield and Yorkshire. Support the arts locally by buying a copy!

20.3 C in Ceredigion in February; 20.1 C at Hampton Water
Works. My friend’s tortoise has come out of hibernation
early (George). Saddleworth Moor in flame. Adders active in
every month of the calendar year. The mayflower in February;
swallows sighted on the south coast. The Woodland Trust tells
us that spring started around November 2018: the deceptive
winter months were nature on the edge of bursting with life,
all swelled and ready to go as soon the temperature was right.
This came sooner than expected, scattering the coatings of
snow and piercing the green and crisp shoots. February, already,
the cruellest month. It remains to be seen if the St George’s
peregrines’ first egg will arrive between the 19–22nd of March,
as it has for the past five years.

How does writing today get its bearings when the compass
points of the temperate northern hemisphere, formally expressed
by the shepherd’s calendar of pastoral poetry, no longer match
the world as we experience it? Similar disturbances to the
vernacular episteme’s pattern and prediction unfold globally; fire
and flood come at the ‘wrong’ times, and more often. What sort
of work can respond to headline figures of ecocidal biodiversity
loss (60% of life destroyed since 1970); to news of catastrophic
insect decline; to each year warmer than the last; to weekly
reports from the ice caps, from the warming and rising oceans?
Not to mention (but we should mention) the manifold ‘natural’
disasters that are symptoms of a system out of kilter. How can
literature be said to do anything under these conditions, or
tackle such ‘vital signs’? Should it? From within the next
extinction, that is to say, this one, what can be said or known with
any confidence? What kinds of writing are calibrated to register
the empirical/affective complex in response to these data?
Route 57’s fifteenth number doesn’t pretend to have answers to
any of these existentially scaled questions, but it might proffer
some tentative inroads from the vantage point of the local. It
represents a collaboration with The Hepworth Wakefield, as
part of the ‘Co-Constructive Humanities’ project, which is
also working with The Kelham Island Museum, Sheffield. This
special issue, Environs (in both senses), addresses the ‘environs’
that these spaces suggest as a cue for creative, critical and
experimental explorations of the ‘modern natures’ we live in, and
which ‘environ’ us.

The issue’s subtitle, Modern Natures, is derived from The
Hepworth’s current exhibition ‘Modern Nature’, which
‘explores our evolving relationship with the natural world
and how this shapes individuals and communities.’ As part
of a field trip to The Hepworth Wakefield in which writers
responded to the exhibition, curator Nicola Freeman told us
that the phrase ‘Modern Nature’ was inspired by the British
writer and director Derek Jarman’s diary Modern Nature,
a volume that meditates on the creation of his amazing,
indescribable garden on the Kent coast below Romney Marsh,
in the shadow of the Dungeness Nuclear Power Station. Jarman
moved to a cottage on the Dungeness headland’s bleak stone
beach after being diagnosed HIV-positive in 1986. Modern
Nature interweaves reflections on personal crisis, industrial
modernity, gay sexuality and modernist aesthetics with the
ever-present consolations of the hardy plants he cultivated there.

The garden itself, all low-to-the-ground shrubs and cacti,
interspersed with vertical stones and other enigmatic forms, is
the art of nature ‘curated’ in the etymological sense of guided or
cared for, given direction, but only minimally formed or ordered.
Jarman’s garden at the edge of the sea, never mentioned in this
issue, is nevertheless its emblem and curating presence.
To environ is to surround, skirt, encompass; to enclose, encircle
or circuit. But it is also to consider what environs us, the borders
and breachings of layers in the atmosphere, ‘green belt’, the
hinterlands and interstices of ecological resilience and/or
biodiversity decline. The Hepworth’s ‘Modern Nature’ exhibition
interrogates the ‘merging of urban and rural landscapes, the rapid
expansion of cities and the increasingly intrusive management
of the countryside.’ These places were historically sites of labour,
where moorland met mill. Now the northern, post-industrial
spaces of modern natures worry at and question urban-rural
distinctions. The writing in this issue puts the terms and tropes
of the ‘liminal’ and the ‘edgeland’ under creative and critical
pressure. Place-writing such as this attends to the complexity
of these environs, lending environmental questions the granular
texture of lived experience, memory, and fears for the future.
Indeed, this special issue wagers that the environs of the
present, while ominous on all (weather) fronts, might also be
generative. They are stimulants that have a direct effect on the
work of place-writers. Eco-catastrophies on both large and
small scales (ie a bumblebee seeking pollen too early in the
year) are emotional triggers which facilitate the engagement
with what environs us. The book that you are holding contains
work stimulated by the place(s) of modern natures, the
‘rewilding’ of the urban and the ongoing management of the rural.

Also writing at the environ, or the limit of the earth-system,
where climate emergency, drought and flood, planetary-scaled
bio-degradation and collapse, are strangely bound to plastic
flows in the oceans and the agency of objects; to consumer
responsibility; and to ecological mourning and mental health.
This is work that often adopts a less human-centred perspective,
as well as thinking through the human as it environs, and is
environed by, the modern natures of planetary existence. 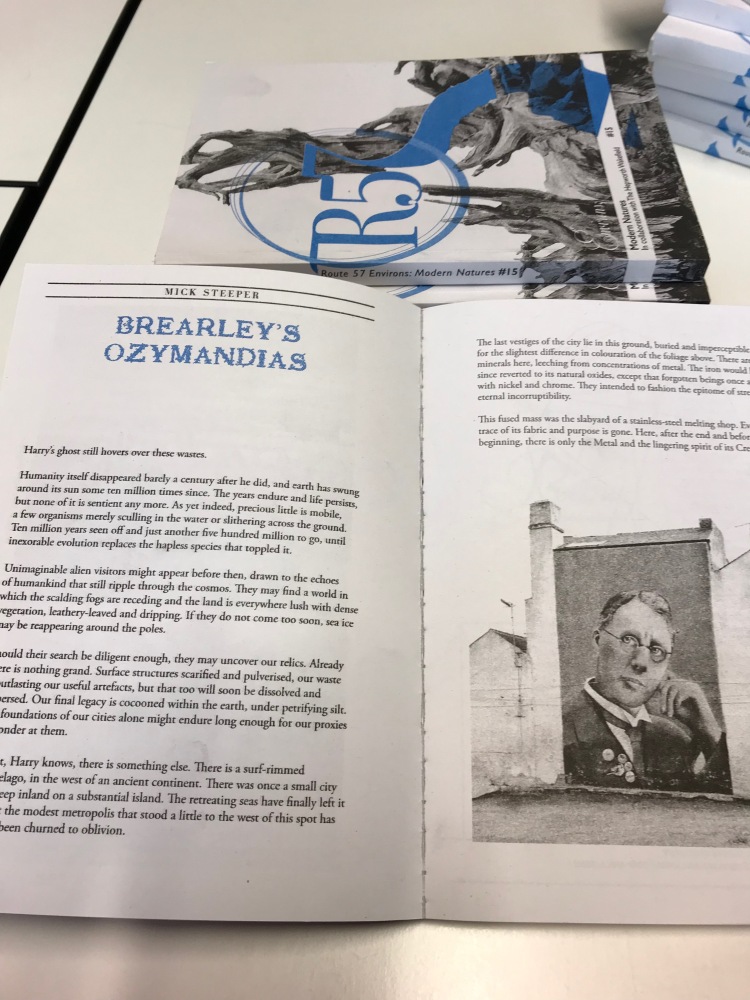