Thanks to the Worldwide Universities Network’s link between the University of Sheffield and Tecnológico de Monterrey, last June I was fortunate to spend nearly three weeks in sweltering, mountainous Monterrey, in north-eastern Mexico. Mexico’s third largest population centre and economically its most dynamic, like Sheffield Monterrey is a former steel city, whose industrial past is a constant presence. The city’s main landmark is the saddleback mountain el cerro de la silla, which dominates the skyline and is strangely echoed by the silhouette of the former steelworks – now a cultural centre – that sits in the Parque Fundidora.

My generous and welcoming academic hosts at TEC Monterrey were Dr Xitlally Rivero Romero and Dr Emma Freeman. Xitlally and Emma introduced me to many of their colleagues in the Escuela de Humanidades y Educación, and Xitally and I exchanged poetry books: I gave her Girasol Press poetry pamphlets and my book Cairn Almanac, and she returned the gift with her excellent volume of dream-sequence prose poems Los insectos, los aretes, los zapatos (Universidad Autónoma de Nuevo León, 2016). Emma and Xitlally also showed me around the city while I did my best to stave off dehydration. They took me to a poetry launch in fancy San Pedro, to watch an unbearably cute ‘liga pequeña’ (little league) baseball match in which Emma’s five-year-old son competed with great seriousness and skill, and even to a bat cave outside Monterrey off the Estanzuela highway. We hung around outside the car at sunset (‘bat o’ clock’) drinking cans of Tecate from a cool box and waiting for thousands of bats (not sure what species) to stream out of the mouth of the cave. Other groups of people were doing the same.

Ahem – to work. While at TEC I gave a talk introducing my then still-to-be-begun British Academy postdoc project at Sheffield, Translating Resistance. The talk consisted of a loose and provisional outline, kindly hosted by the Cátedra Alfonso Reyes, entitled ‘Palabra de Guerrillero: Anglo-American Avant-Gardes, Translation Networks, and Militant “Mountain” Poetics’. But what I want to focus on here is a workshop I put together the following week, ‘Translation, Poetry, Power’. The idea was to get participants from the School of Humanities to think collectively and informally about some questions raised by recent critical interest in translation, the ‘cultural turn’ in translation studies (the translation of codes and cultural practices as well as between languages narrowly defined), by the foregrounding of the translator’s active political role, etc. 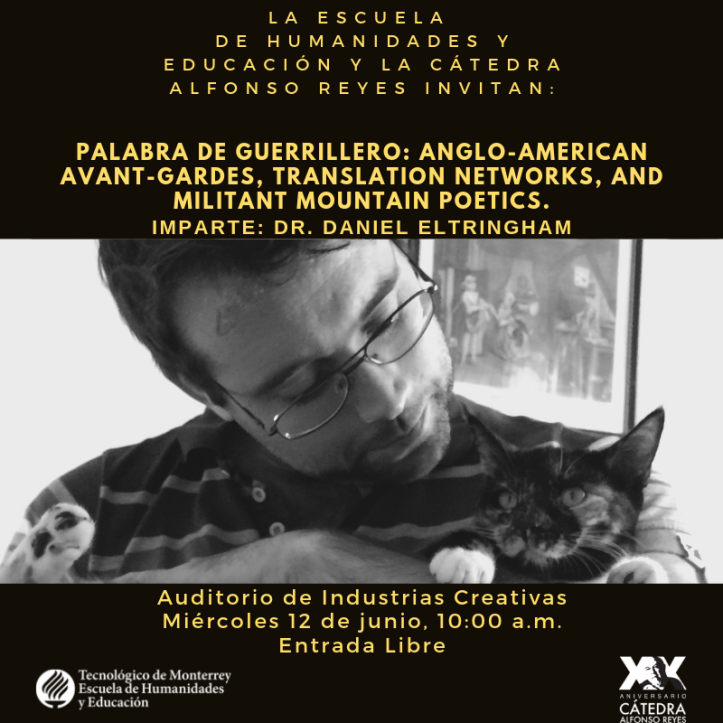 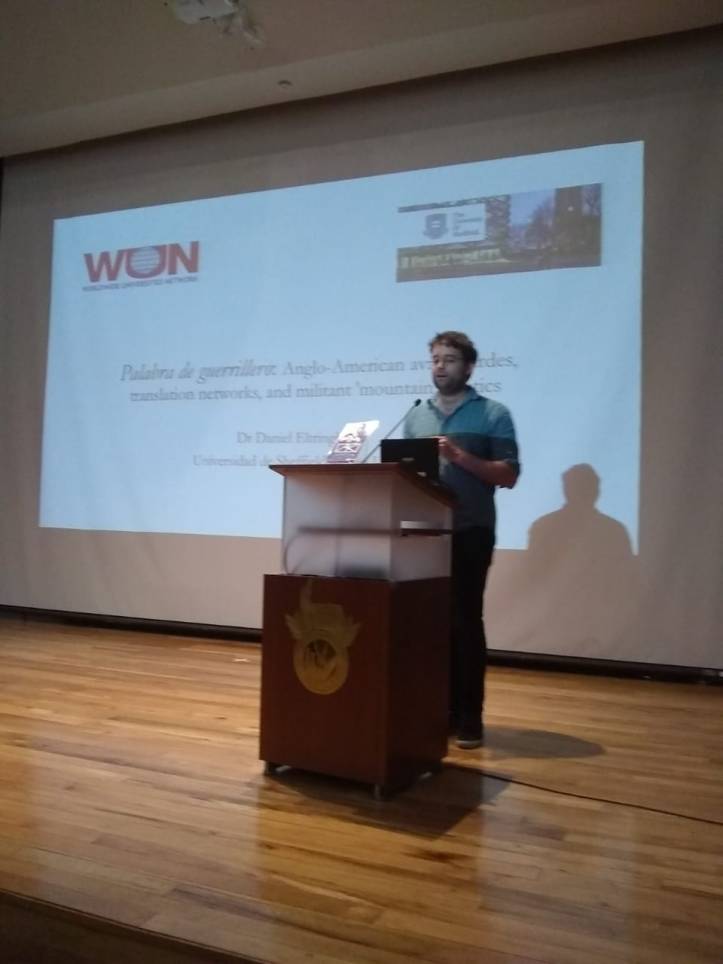 The developing conceptual frame I brought to Monterrey was informed by this sort of initial reading and an impulse to resist translation’s often too-easy transfer of value, which replicates, in part, logics of cultural imperialism. I was influenced by the Mexican poet Herbierto Yépez’s critical and poetic work, most recently Transnational Battle Field (Commune Editions, 2017), in which he sees a too-easily integrated ‘transnational field’ as little more than ‘neoliberal experimentalism’ aligned in the political sphere with free-trade treaties and a hegemonic monolingualism that ‘wants new markets, new archives’. Nisha Ramayya quotes Yépez speaking on a roundtable on ‘Moving Across Languages, Borders, and Cultures’, in a really useful 2018 blogpost for The Poetry School to accompany her course ‘Decolonising Translation: Poetry, Power, Relation, and Difference’ (‘Why do dominant cultures translate so much?’). Yépez argued that translation is ‘clearly imperialistic’: its practice is ‘how to gather the other […] Why do dominant cultures translate so much? It is the same as gathering oil.’ In this view translation, like other modes of writing and cultural transmission, is about the power relations that lie behind an ideology of infinite value-transfer: a formula for substitution that determines cultural equivalence in the terms of the powerful. But, as Nisha says, while it is the case that ‘translation cannot be extricated from histories of imperialism and colonialism’, it doesn’t follow ‘that translation is an intrinsically imperialist or colonising act’. Of course, it can also (we hope) be non-commodified sharing, and the sensitive negotiation of difference. Otherwise, what’s the point?

As well as and related to this decolonial politics of translation, the other major critical stumbling block it seemed necessary to bear in mind is what we might call translation’s myth of origin. The clichés of translation-as-loss, and of the impossibility of fidelity to an origin or source of stable meaning, are clearly in part silly romantic notions that need to be considered critically, as Karen Emmerich does in Literary Translations and the Making of Originals (Bloomsbury Academic, 2017). As Julia Constantino writes in a collection of essays on translation by Mexican women academics, ‘the idea – a little romantic – of being able to blend oneself with the author of the original text can lead to a colonising appropriation.’ (rough trans. mine; this is the Spanish: ‘la idea un tanto romántica de poder fundirse con el o la autora y con el texto origen puede conducir a una apropiación colonizadora’. ‘Narrativas traductoras: un acercamiento a la traducción desde la noción de violencia moral’, en Leer, traducir, reescribir, ed. Nair María Anaya Ferreira, Bonilla Artigas Editores, 2014).

In the workshop, however, while we were concerned to critique notions of fidelity and textual origin, there was nonetheless a consensus that translation as craft does require keeping these concepts at least in view, but not viewing them as dogma. Below is a brief account of each of the texts discussed, followed by some concluding reflections generated by the discussion.

[bio translated from Spanish]: Dolores Dorantes was born in Veracruz in 1973, and lived for many years in Ciudad Juárez. She was forced to leave her country due to threats she received as a result of her feminist activism and her journalistic work. Her books, Poemas para niños (El Tucán de Virginia, 1999), Estilo (Mano Santa, 2011), Querida fábrica (Conaculta/Práctica Mortal, 2012) and Intervenir (Ugly Duckling Presse, 2015) are available in the Archivo de Poesía Mexa. Her collections SexoPUROsexoVELOZ (Lápsus/ Oráculo, 2004) and Septiembre (Kenning Editions, 2007), may be downloaded here: http://doloresdorantes.blogspot.com/.

Thinking of Theresa Hak Kyung Cha’s remarkable Dictee (1982), I wanted to know, how is translation like or unlike dictation: is the translator compelled to record the speech they hear, and how can one respond ‘to the dictates of a dictatorial world’? Who has voice or the right to speak? In what sense is ‘silence a way of speaking’ and are the unsayable and that which cannot be said the same thing? We wondered about the particular effects generated by Dorantes and Flores Sánchez’s use of the imperative forms of the verbs ‘intervene’, ‘collaborate’, and ‘question’. Particularly, in what ways, in the context of Mexican border violence, the world “intervenes” in/to writing, translation, and the body.

 ‘Some new thing […] made in the frame of againness’ (Kate Briggs).

We looked at extracts from Briggs’ curious work of experimental autofiction, which is full of interesting reflections on translation (she translates from French, especially Roland Barthes). This Little Art deconstructs the relationship between translation and ‘bad-or-un-translation’ from a feminist critique of masculine notions of ‘correctness’. We considered the role of error, obstacle, and interrupted rhythm (which Briggs calls “disrhythmy”), and her theoretically suggestive descriptions of the way translation mediates space and the time through repetition or return (language that is ‘set back into relation’ within a ‘space of close action’).

 ‘We cannot take for granted that this word can be used for that body’ (Jen Hofer).

The third text we looked at, the introduction to Tripwire’s 2015 issue ‘Transnational/Translational’, situated our discussions within the neoimperial, translocal and global contexts that inform, complicate or enrich understandings of translation as in part an expression of geopolitical power and the transfer of value. We especially questioned the relationship between political notions of ‘development’ and what the editors call an ‘uneven’ poetics.

In the same issue we also looked at another essay by Jen Hofer, in which she reflects on her translations of the Uruguayan poet Virginia Lucas, including some of her poems in Spanish and English. Lucas’ work raises questions around translating the untranslatable, especially in Hofer’s discussion of the title ‘AMÉ.RICA’, a pun on ‘America’ and the Spanish phrases/words ‘I loved’ (first-person past tense of ‘to love’, amar) and ‘rich’ (feminine form of the adjective, which can mean ‘wealthy’ or ‘tasty’) and the fragmented words of her poem ‘Domiñon’. In these circumstances, we wondered, is it desirable to try to translate all levels of meaning and replicate them? Or accept loss (and perhaps gain)? We also talked here about the “trans” in translation and/or linguistic experiment (the queering of language).

Some concluding reflections. Translation can be a counter-institutional act, within the hollowed-out discourse of the corporate academy: by translating empty words into meaningful actions, things can get done while saying, literally, nothing. The roles of translator and poet are, or should be, equal and non-hierarchical (obviously?). Re-creation is creation. The notion of the ‘original’ is problematic, to say the least, in the context of translation from indigenous languages where questions of ‘firstness’ are politicised front-and-centre. And anyway, the source wants to flow (this sounds better in Spanish: ‘la fuente quiere fluir’). But does the receptor want to receive?